Some of the links below are affiliate links. This means that, at zero cost to you, I will earn an affiliate commission if you click through the link and finalize a purchase.

This recipe for homemade Starbucks Cinnamon Dolce syrup is perfect for anyone that loves the aroma and flavor of warm cinnamon.

A splash or two of homemade cinnamon dolce syrup transforms any home-brewed coffee or tea latte into a yummy cafe-style drink.

Buttered cinnamon toast is one of my favorite morning treats. And the warm and toasty flavor of cinnamon dolce syrup is just as delicious.

As a matter of fact, while making this syrup on the stove, the aroma reminds me of a warm coffee cake coming out of the oven.

Now, you many be wondering, what does dolce mean?

In fact, dolce is simply the Italian word for sweet.

And let me tell you, Starbucks Cinnamon Dolce syrup lives up to its sweet name. And so does this homemade recipe.

Luckily, like most simple syrup recipes, cinnamon dolce coffee syrup is really easy to make at home. Let me show you how.

One look at this ingredient list and you may realize you actually already have everything you need in your kitchen.

However, I will say, I prefer to make this syrup using cinnamon sticks instead of ground cinnamon. So if you don’t have any cinnamon sticks on-hand, I think it’s worth picking some up.

That being said, ground cinnamon is perfectly fine to use. In fact, I’ve noticed other recipes that call for it.

However, there’s a downside to using ground cinnamon; it does not dissolve in the syrup.

Of course, you can strain the syrup through cheesecloth, but that’s just another step.

Obviously, you can also just leave the ground cinnamon floating in the syrup. That’s perfectly fine; although it’s just not my preference.

How to Make Starbucks Cinnamon Dolce Syrup at Home

Personally, what I love about making copycat Starbucks Cinnamon Dolce coffee syrup is that no fancy kitchen tools are necessary.

Honestly, you pretty much only need a saucepan, stove, and perhaps a whisk.

Additionally, you need some sort of jar to store the syrup inside.

For example, any mason jar will do.

However, I like to put my collection of homemade simple syrups into those inexpensive, squeezable condiment bottles.

That way, it’s easy peasy to squeeze any flavor of syrup into my coffee mug or tea cup.

Since you most likely already have all the cinnamon dolce ingredients on-hand and making it doesn’t require any special tools, let’s get started.

Starbucks Drinks that Use Cinnamon Syrup

Now that you’ve made your own homemade bottle of cinnamon dolce syrup, you may be wondering what types of drinks you can make with it.

For that, let’s get a little inspiration from the Starbucks menu.

The main Starbucks drinks made with Cinnamon Dolce syrup are:

Of course, you can customize any Starbucks drink with any flavor of syrup, including cinnamon.

However, the two espresso lattes, one hot and one iced are delicious. Dare I say, topped with whipped cream and cinnamon dolce topping, they’re decadent.

But don’t think you can only use this syrup for fancy coffeehouse types of drinks.

Although, in the fall I do like to make my homemade Caramel Apple Spice recipe.

But a little bit of cinnamon sweetener stirred into any plain coffee or tea or simple latte is the perfect use for this yummy syrup.

How to Sweeten Coffee & Tea with Syrup

Did you know that syrup, no matter the flavor, is usually the first ingredient Starbucks adds to the cup?

I figure Starbucks knows what they’re doing, so at home I also add flavored syrup to my mug first. I think it’s sort of like the old saying, “What’s good for the goose is good for the gander.”

I find that when I pour piping hot coffee or tea over the syrup, it all mixes together so beautifully.

Not to mention, it throws off that delicious cinnamon aroma I was talking about earlier.

By the way, don’t think this syrup is just for hot drinks. It’s perfect for iced lattes, too.

My collection of homemade copycat syrups is starting to take over one shelf in my refrigerator.

They’re so easy to make, that I’ve experimented with all sorts of flavors.

Just so you know, however, if you prefer to just buy a bottle of actual Starbucks syrup, you can do that too. Some flavors are available on Amazon and you can even buy a bottle from a Starbucks barista if they have one to spare.

Here are a few of my other Starbucks copycat syrup recipes, along with some drinks I put them in: 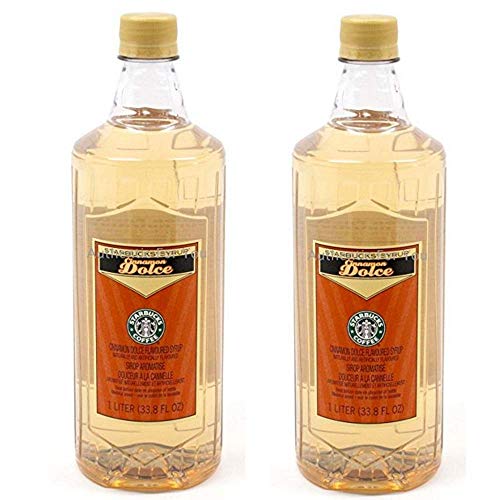 Make your favorite Starbucks tea and coffee drinks at home with this 1 Liter bottle of vanilla syrup.

Many coffee syrup recipes call for equal portions of water and sugar. This cinnamon dolce syrup recipe has more sugar than water to produce an extra sweet syrup.

Skip to Recipe Scroll to Top